The latest crime statistics published earlier in the month show a 7% fall in crime in England & Wales over the past year which is great news for the general public and great to improve the overall well-being of the Nation.  A good result but what does that actually mean to us the general public, well I’m going to drill down into the stats and give you a brief overview here.

The Home Office and then the Office of National Statistics have been carrying out the Crime Survey for England & Wales (CSEW) since 1981 looking at trends and levels in crime in terms of incidents reported in their survey as well as actual police recorded incidents. The results are intended to give guidance on future policy and are compiled from a sample of 35,000 households.

18 months ago it was decided that the police recorded crime data included in the report didn’t meet the strict criteria to be considered a national statistic but the data was kept as part of the quarterly report and probably gives the most accurate picture of what is actually happening in terms of crime, how people perceive it  and how or indeed if it is reported to the police. 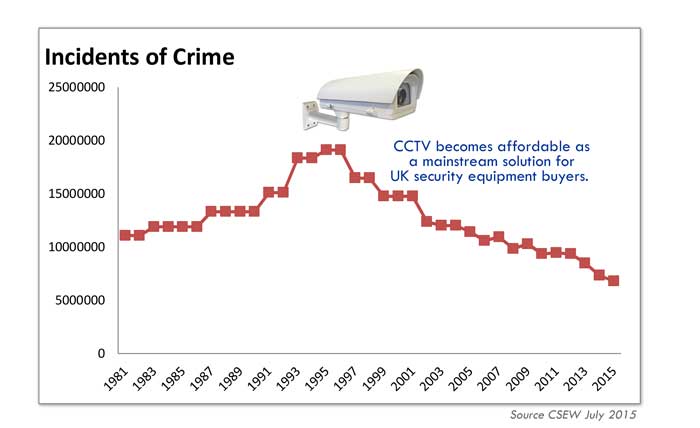 What’s on the up?

The results on the whole look fairly positive and the increases in certain categories of crimes are not really that surprising when you compare them to what you hear on the news each evening.

Where sexual offences actually reported have experienced a massive rise of 37% the CSEW finding found that an actual increase in offences occurring hadn’t taken place. This can probably be attributed to victim’s willingness to now report an offence and probably has been impacted by the “Savile effect”.

Unsurprisingly fraud is on the rise with 4 in every 1000 person reporting an incidence to the Police or other relevant anti-fraud body. According to the British Retail Consortium (BRC), the UK experienced online sales of 37 billion pounds sterling in 2014 so the growth in crimes such as credit card fraud is inevitable as offenders find new ways to beat the system. The perpetrators are not the career criminals of days gone by known by the local police but a new breed of  faceless offenders that are increasingly hard to find and convict as they can be based anywhere in the world.

So what do the latest figures say about the effectiveness of CCTV?

Well I started working in the UK CCTV industry exactly  20 years ago just as CCD camera technology developed to become a viable option as a security system for mainstream businesses so I’m pleased to see that since crime peaked in 1995 it has steadily declined to an all-time low since this report first started back in 1981.

If we take a closer look at where CCTV cameras are most likely in operation, I think we can easily attribute some of these positive results to CCTV usage serving as a deterrent.

On the downside however and beyond the remit of a CCTV system,  it looks as though crime has underground in the form on on-line fraud.